1st Burroughs Documentary to be Rereleased 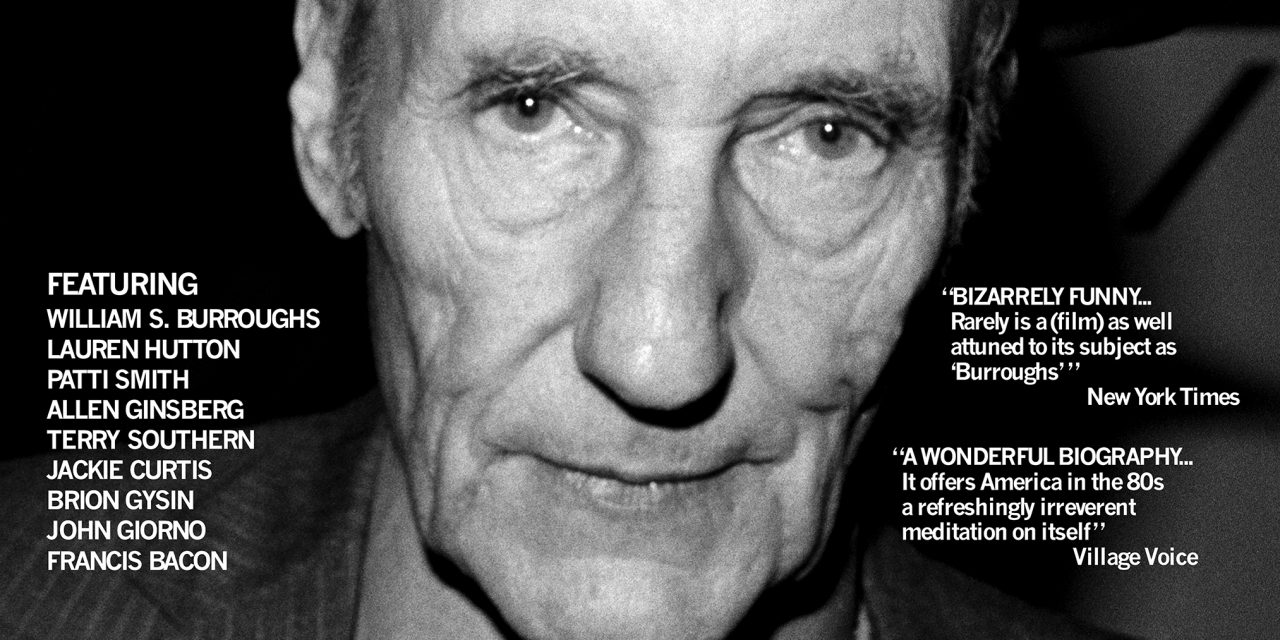 The first long feature documentary about iconic writer William S. Burroughs, one of the most radically subversive literary figures of the 20th century and Godfather to the Beat poets such as Jack Kerouac and Allen Ginsberg, is set to be restored and re-released after decades of being out of print.

The campaign to restore Burroughs: The Movie will officially be launched on Kickstarter on World Aids Day December 1st 2012 and it will run for 30 days. A rare screening of the film will be held December 11th 2012 at 7pm at the October Gallery in London, UK (24 Old Gloucester Street Bloomsbury, London WC1N 3AL).

The late Howard Brookner began his Burroughs film while in NYU film school in 1978 with his fellow students Jim Jarmusch, who did the sound, and Tom DiCillo on camera.  Five years later Brookner had finished Burroughs: The Movie with the help of BBC.

Burroughs: The Movie was Howard Brookner’s first of three feature length films followed by Robert Wilson and the Civil Wars (1986) and Bloodhounds of Broadway (1989) – starring Madonna, Matt Dillon and Jennifer Grey among other well known actors. He died of AIDS in 1989, at thirty-four years old. “If I live on it is in your memories and the films I made”, he wrote in a letter he left to his parents. “That letter was my engine to bring Howard back to life through his work. After a long search I found the only print of Burroughs: The Movie in good condition and embarked on a project to remaster it and make it available to the public”, says Aaron Brookner, nephew of the filmmaker. “The remastering is part of the work I want to do to preserve my uncle’s legacy”.  Howard Brookner’s archive includes more than 300 assets that need urgent preservation. “The re-release of Burroughs is a first step towards recovering what he made while he was alive.”

‘Burroughs: The Movie’ features the writer’s close circle of friends including Patti Smith, Allen Ginsberg, Brion Gysin, Francis Bacon, John Giorno, James Grauerholz and Terry Southern. The film premiered at the 1983 New York Film Festival to rave reviews. Janet Maslin from The New York Times wrote: “Rarely is a documentary as well attuned to its subject as Howard Brookner’s “Burroughs”, which captures as much about the life, work and sensibility of its subject as its 86 minute format allows. (T)he quality of discovery about “Burroughs” is very much the director’s doing, and Mr. Brookner demonstrates an unusual degree of liveliness and curiosity in exploring his subject”.

February 5, 2014 will mark William S. Burroughs 100th Birthday and the film should be released by then. Also 2013 will mark the 30th Anniversary since the release of Burroughs: The Movie and that’s when the restoration will take place.

Howard Brookner’s archive collection contains never before seen material from Burroughs: The Movie including interviews with Andy Warhol, Patti Smith, Frank Zappa, Brion Gysin, the legendary Nova Convention, Brian Jones, Anthony Balch and more. “He documented what was probably the last comprehensive counter culture movement which came out of downtown New York City in the late 1970s/early 80s, influencing so many of the leading styles and ideas of today,” says Aaron Brookner.

Beyond the restoration of the Burroughs film, any proceedings beyond the target funding will be used to restore and preserve Howard Brookner’s archive described by Francis Poole, head of Film and Video Collection at the University of Delaware, as “one of the most amazing collections I have ever seen”.  Aaron Brookner, who is also a filmmaker, plans to create a film about his uncle’s life called Smash The Control Machine: Howard Brookner & the Western Lands using much of the found footage. “Howard is a strong inspiration and he lived a short but beautiful life full of sardonic wit.  He was a great filmmaker and this discovery will allow the world to enjoy his work. I want to honour who he was through the memories of those he influenced, and the films he made.”

To finance the restoration project, a crowdfunding campaign will be launched on Kickstarter to raise USD 20.000 (approx 13.000 British Pounds or 16.000 Euros).

For more information about the campaign to restore Burroughs: The Movie, Smash the Control Machine film and Howard Brookner’s archive please visit www.aaronbrookner.com

To contribute to the Kickstarter Project, please click here.

Why Bob Dylan Was Wrong About Lenny Bruce
"You are talking about a writer singing something that might rhyme," says Kitty, "Bob Dyla...
John Sampas
John Sampas, executor of the Jack Kerouac Estate, has passed away peacefully at home in Gr...
The Beat Rap Sheet
But yet, but yet, woe, woe unto those who think that the Beat Generation means crime, deli...
Barry Miles and John Tytell Discuss William S. Burroughs
Marking the 100th anniversary of the birth of William S. Burroughs, Barry Miles - a friend...
Homophobia in the Media’s Treatment of New Ginsberg Movie
So Daniel Radcliffe is going to play Allen Ginsberg in a new movie, called Kill Your Darli...
Trek to the Berg
The things I do in pursuit of the true Jack Kerouac . . . it’s always daunting driving int...