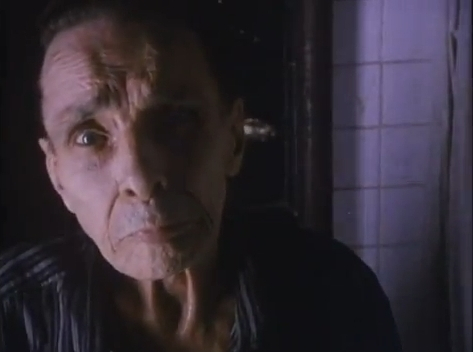 Starring beat icon Herbert Huncke (1915-1996) in his sole acting role, The Burning Ghat was filmed on location in Huncke’s then apartment on Henry Street in Brooklyn, New York. Co-starring his longtime companion Louis Cartwright (later murdered in the East Village in 1994), the film was written and directed by James Rasin (Beautiful Darling: The Life and Times of Candy Darling, Andy Warhol Superstar) and Jerome Poynton. It was edited by Francois Bernadi (director: Walking the Dog, Original Beats, for a kiss…, The last boat), and shot by Michael Slovis (Emmy Award winning cinematographer of “Breaking Bad”).

Although conceived and scripted as a dramatic short, the film incorporates documentary elements reflecting the real life relationship between Huncke and Louis. Allen Ginsberg wrote of the film, “O Rare Herbert Huncke, live on film! The Burning Ghat features late-in-lifetime old partners Huncke & Louis playing characters beyond themselves with restrained solid self-awareness, their brief masquerade of soul climaxing in an inspired moment’s paradox bittersweet as an O’Henry’s tale’s last twist”. Harry Smith said of the film, “It should have been longer”.

The Burning Ghat was featured at the 53rd Venice Biennial, and included in the Whitney Museum’s “Beat Culture and the New America” show of 1996. It won the Gold Plaque Award for Best Short Film at the 1990 Chicago International Film Festival.

Tom Waits on Letterman
You don't get much more Beat than Tom Waits.
Guilty of Everything
Herbert Huncke was the man who brought the word "beat" to the Beat Generation. He was a Ne...
New Video: Hunter S. Thompson Reads The Curse of Lono
hunter and Ralph read Lono from Itch Film on Vimeo.
Herbert Huncke at Cafe Nico
Another Huncke video! And why not. The man is a delight to listen to. Thanks to Laki Vazak...
The Beat Rap Sheet
But yet, but yet, woe, woe unto those who think that the Beat Generation means crime, deli...
The Beat Generation and Mental Hospitals
The 1940s and 50s were difficult years to be non-conformist, and that was doubly true if y...