Review: The Best Minds of My Generation 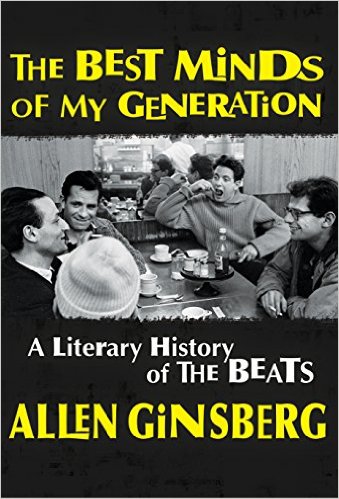 There are so many books about the Beat Generation that focus on the writers’ roles as rebels and “literary outlaws,” who break with convention and reject all the old ways. They are portrayed as angry young men and outsiders in life and literature. This view is not entirely incorrect, but in The Best Minds of My Generation, a collection of Allen Ginsberg lectures edited into a coherent book form by Bill Morgan, we are presented with a very different view of the Beats.

Ginsberg was famously the man who promoted his friends – getting their work published and defending it against censorship or criticism – and he was perhaps the ultimate Beat Generation scholar. He could explain the literary methods of Jack Kerouac and William S. Burroughs better than even they could, and in this wonderful book, that’s exactly what he does. He uses his encyclopedic knowledge of literature to set the Beats in the correct context. He places their work well within the literary canon, rather than simply a bizarre and rebellious literary movement set entirely apart from its predecessors.

This, for me, was the book’s greatest strength. It is easy in writing about the Beats to get bogged down in familiar claims, but in The Best Minds of My Generation, it is almost as though Ginsberg is talking about an entirely new group of writers… The way he describes his peers’ writing is fresh and original, insightful and intelligent. He carefully scrutinizes the work of Kerouac, Burroughs, Gregory Corso, and indeed his own output, as well as trying to pin down exactly what made a piece of work “Beat.” His observations are far more perceptive than any I can recall having heard, and of course as a central participant in the Beat Generation, he’s also able to bring his own memories and experience – though he wisely remarks, “I can’t propose what I’m saying as authentic fact, but only as my recollections, [and] they have to be checked against other people’s versions.”

Ginsberg frequently refers back to a famous moment in Beat lore when Burroughs introduced Ginsberg and Kerouac to his personal collection of books, including Oswald Spengler’s The Decline of the West. The repeated references indicate that this was, for Ginsberg, a pivotal moment in Beat history. Indeed, though the Beat Generation can be hard to pin down exactly, and was possibly a social movement, Ginsberg is keen to set it in its fully-deserved literary context, and this introduction to new areas of literature changed Ginsberg and Kerouac’s lives. Although the three men would go on to write in vastly different styles, they were linked through this collection of books, which had a strong influence over each writer. 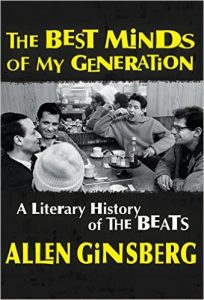 I found it fascinating, too, to read Ginsberg explaining his own development as a writer. We so often read about his literary influences – with a particular emphasis on, for example, William Blake and Walt Whitman – and yet Ginsberg downplays the significance of Whitman (“I wasn’t that interested in his form”), instead giving very concrete examples of the importance of William Carlos Williams throughout the book, and later of Christopher Smart. His description of his own transition from polished poems in a classical style to “Howl” is illuminating. So many critics seem to think of the Beat writers as wild, unrestrained, or even untalented artists who were just fortunate to catch a wave of popularity, and yet it is so abundantly clear what mastery they held over their medium, and how studious they were of the classics. Like any creative geniuses, the Beat writers could impersonate the greats with accuracy, but chose to create something new.

In exploring Kerouac’s books, he is incredibly astute. Ginsberg picks up on short phrases and explains in detail precisely why they are genius. These are things I must say I had previously failed to observe, but which are fundamental to the poetic brilliance of Kerouac. (He claims as one of his favourite Kerouac lines, “rack my hand with labor of nada,” because of its carefully chosen vowels.) Ginsberg’s reverence for Kerouac is clear throughout. He selects Visions of Cody as “Kerouac’s greatest moment of writing” and “the most seminal text” in Beat history, and repeatedly points to Kerouac as a massive influence on his own work, and that of Burroughs.

Later, in talking about Gregory Corso’s poetry, Ginsberg does the same as he does with Kerouac, picking it apart to explain each image and, importantly, the juxtaposition – or contradiction – of images. Again, here I must confess having been rather ignorant about Corso’s poetry, and from this book I developed a greater appreciation. However, I can’t entirely agree that “Corso is the most inspired and intelligent and excellent of all the poets.” He also offers selections from Burroughs with insightful commentary and historical information, although this section is perhaps not as groundbreaking as his observations on Kerouac and Corso.

Not only can Ginsberg choose a particular piece of work and take it apart to explain why it works, but he picks works from across each writer’s career to show development and change, and he sets it all within the literary historical framework, showing where each piece of work originated. Thus, this is not just a valuable reference book for scholars, but an incredibly readable text and that is a must-read for any fan of Beat Generation literature.

My only criticism is that it rather unravels towards the end with a few short chapters that seem decidedly tacked on, including passages on John Clellon Holmes, Carl Solomon, and Peter Orlovsky. For Holmes, Ginsberg has nothing positive to say, marking a huge shift in tone from his enthusiastic advocacy of other Beat writers up until this point. These writers are obviously important in Beat history, but the chapters on their work are short and unnecessary, and could perhaps have been incorporated better into the earlier section on what exactly constituted the Beat Generation.

The Best Minds of My Generation: A Literary History of the Beat Generation, by Allen Ginsberg (and edited by Bill Morgan), will be released in April, 2017.

Jackie
Jackie-ing Jackie reading Jack Ker-o-uac Black Jack Bouvier Parlez-vous … français? ...
Moving Towards the Light: the Triumph of Spirituality in the Poetry of Allen Ginsberg
‘Sunflower Sutra’ Ginsberg’s ‘Sunflower Sutra’ bursts with a range of vivid imagery, c...
4 Important Travel Destinations for the Beat Generation
The Beats were, in many ways, an international literary movement. Although in defining the...
Subterranean Lost Love
“They are hip without being slick, they are intelligent without being corny, they are inte...
Kitty Bruce Talks To Beatdom About Lenny Bruce and Religion
In November, Kitty Bruce, daughter and only survivor of  comedy icon/legend Lenny Bruce, w...
Daniel Radcliffe to Play Allen Ginsberg
Apparently Harry Potter star, Daniel Radcliffe, has agreed to play the role of Allen Ginsb...