What is the Beat Generation?

It should be easy to answer the question, “What is the Beat Generation?” or “Who were the Beats?” but actually it is rather difficult. It’s not as simple as the definition you will find on Wikipedia. Different people have different answers, and there is no one correct way of answering these questions. In this article, I will try to use the Beat writers’ own words to explain who and what they were.

The Simple Answer – Who were the Beats?

“Three writers does not a generation make.” — Gregory Corso

Some people will tell you that the Beat Generation was indeed a group of three writers: Allen Ginsberg, Jack Kerouac, and William S. Burroughs. Certainly they were the most famous of the Beat writers, and most people today look back on them as – at the very least – the center of the movement.

John Clellon Holmes, in his 1952 essay on the Beat Generation, said “Any attempt to label an entire generation is unrewarding,” and he was quite right. It is absurd to label three men as a generation unto themselves, but there’s more to it than that. Their work is taken as representative of the thoughts and style of their peers, as well as in a more extended net to encompass their whole generation. It was these men who made the word “Beat” famous and who popularized a new style of writing. Kerouac first explained what “Beat” meant to wider America, although he was not the first to use the word.

Was the Beat Generation a Literary, Cultural, or Social Movement?

Above, I mention them as writers and this suggests that  the Beat Generation was purely a literary movement. The name “Beat Generation expands that beyond the three men to a wider group – perhaps even a whole generation of young people in the 1950s.

So was the Beat Generation a purely literary movement, or a wider cultural phenomenon, or was it a social thing – in other words, the friends of these three writers?

The most obvious answer is that the Beat Generation was simply a literary movement, with Ginsberg, Burroughs, and Kerouac at the center, and thus Beats were writers who published stories during a certain time frame in history, on certain themes and with a certain style. 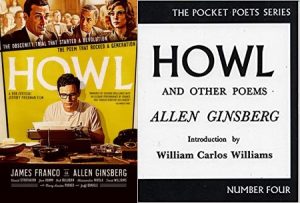 In 1958, Allen Ginsberg said something similar:

the whole scene is strictly a literary scene, basically, with technical literary practical meanings (shifts in prosody of verse and experiments and progress in prose forms) […] most of the sociological generalizations and middleclass publicity discussions (“What does beat mean? is it positive or negative? why do they steal hubcaps?) are false issues created by journalistic minds, hung up with meaningless habitual categories that just do not fit and never have been the concern of artistic (or spiritual) creation, i.e. square.

Yet elsewhere he seemed to contradict this stance, saying:

There is not beat poetry, or a beat novel, or beat painting. Beat is a poetic conception, an attitude toward the world. But, yes, we have done theater…

If it was more than a literary movement and if we are to view the Beat Generation as a group of people then it limits us to time and events, rather than themes and styles. It rules out later writers and artists who are often called “Beat.” We are also forced into considering people who were privy to the action, but who didn’t necessarily consider themselves “Beat” or even part of “the New Vision,” (a term Kerouac and Ginsberg used in the 1940s to describe their literary ambitions) but who simply kept in the same circles. If indeed the Beats were a generation, then in considering them we are considering millions of people who probably led lives diametrically opposed to those we consider “Beat”…

Therefore, perhaps it is most fitting to label as the Beat Generation a group of writers and thinkers surrounding Kerouac, Ginsberg, and Burroughs during the forties and fifties. The problem there, though, is that we are admitting that one could be Beat without having been a part of the Beat Generation by virtue of age or location.

Which then begs the question:

In 1945, young Kerouac and Ginsberg were heavily influenced by the Romantics, and began debating something called “the New Vision”, inspired by William Butler Yeats’ A Vision. At the time both Ginsberg and Kerouac were exploring new areas of literature and life, and began formulating some of the ideas that are now often associated with the Beat Generation.

Ginsberg described their point of view:

Everybody [is] lost in a dream world of their own making. That was the basis of the Beat Generation. That was the primary perception. The idea of transience of phenomenon – the poignant Kewpie-doll dearness of personages vanishing in time. Not a morbid interest in death but a realization of the mortal turn.

It seems that being Beat – even before the term was first used – meant being an outsider. It meant thinking differently and acting differently. There is a popular notion that Beat is a byword for “rebellion,” and that these were angry young men and women out to spite society. Again, Allen Ginsberg disagreed:

There are varying reports on the coining of the phrase “Beat Generation” but regardless of which story is accurate, the meaning of the word “Beat” is rarely debated. It was probably Herbert Huncke who first used the word “Beat” in the presence of Kerouac and co, and he used it to describe himself. He believed he was beat.

Huncke was an odd figure of curiosity and near worship for Kerouac’s Columbia group of friends and he was influential among them. His use of the word caught on, and came to describe these disaffected writers, artists, bohemians and criminals. These outsiders shared a sense of dissatisfaction with the world, yet strove not to change it, but to carve out their own little space in the face of a crushing conformity.

Could the Beat Generation have been Spiritual?

Jack Kerouac was keen to steer the definition away from criminality and towards religiosity. As the unwilling spokesman of the Beat Generation in the late fifties, he found himself tasked with writing various articles about the Beats and answering questions from numerous journalists. In 1959 he was asked by the American College Dictionary editors to define “Beat Generation” and he wrote this:

members of the generation that came of age after World War II-Korean War who join in a mystic-disaffiliation and material-simplicity values, supposedly as a result of Cold War disillusionment. Coined by JK.

Elsewhere, he was keen to tie the meaning of the word to “beatific,” meaning a sort of holy bliss in Christian theology.

So what was the Beat Generation? Well, that depends on who you ask. Some would say that it was a movement begun in the 1940s, popularized in the 1950s, and which morphed into the hippies of the 1960s. Others would say that the Beat flag still flies and that anyone writing confessional poetry in the 21st century is as Beat as Ginsberg. I’ve heard people included Diane di Prima, Charles Bukowski, and Hunter S. Thompson as Beat, second wave Beat, and post-Beat.

One thing is for sure, though. The Beats were not beatniks.

The so-called Beat Generation was a whole bunch of people, of all different nationalities, who came to the conclusion that society sucked.