All of our birthdays came in a row, and the numbers that year were rich with meaning.

I followed Scrapple’s Lucky Seven with my own Big Two–One. Head gave me a coupon for five free singing lessons with him, plus a charcoal caricature of a goateed me which a Lantern regular had drawn to illustrate one of my Head-bestowed nicknames: Toulouse. Head had handed me that handle years before for my role as chronicler of the scenes at The Lantern and The Fusebox. He’d dusted it off for frequent use now because the moniker suited my new lady-killer (uh huh) Toulouse Lautrec goatee and poked fun at my too–loose pants and too–loose lips, the latter a jab at a few loose quips I’d made about Head’s morns abed and mounting expenses. Nevertheless, it was a Hammerhead name, and I treasured it thusly.

Head’s own big–numbered birthday, his Big Five–Oh, came the first week of June. It was, he said, a meaningless number. But as numbers go, it was big and round and momentous enough in my mind at least, to warrant an extra–special gift, which I bought for him with a full week’s pay—a VCR, his first ever.

Head held the unit in the big loving hands that had held Baby Bookmark. “Can you set it up, dude?” If there was one thing I knew, it was home entertainment. Head’s intimate dude reflected my increased importance in his life. As I set the unit up, Scrapple ran circles around me whooping like a worshipful primitive, and Head trekked into the garage returning with a head full of dust and a videotape in hand. “I’ve been waiting to play this forever, dude.” He nodded at the unit as if he were unworthy to touch it. I inserted the tape, and Head said with misty eyes, directed more to spirits in the air than to me, “J.T.’s antiwar mob film, Hunger for Peace: A Mob Fairy Tale. Jer financed it himself in the thick of the Cold War.”

We settled onto the couch as if at a premiere. The plot unfolded in the familiar way. A big–city mob rises to power. A crosstown mob encroaches on its turf, and first blood is spilled. In a departure from form, a midget and a zombie hitman figure in the gunplay — “experimental” said Head — and the prospect of an all out turf war arises. The mobs parlay at a smoke–filled Italian restaurant, the chieftains flanked by flinty–mugged toughs. One is Head, a pug–nosed young heavy in a sharp–lapelled suit, a slanted fedora, a charcoal shirt, and a stiletto tie. The plot veers radically off course at this point as the leaders decide to make peace, not war.

“Now comes a real–time dinner to celebrate the peace,” Head said with eyes riveted to the screen. “With the dinner dialogue all improvised. Daring stuff.”

“It seems to me,” improvises one mob boss, wiping his lips after finishing a luscious antipasto, “we could use more prosciutto.”

A murderous silence ensues, broken at length by the boss of Head’s mob. “I think we’ll be fine without the prosciutto, Eddie… Don Eddie. You know, the minestrone is nice.”

A terrible pause and a shifting of eyes as the gunmen look around, wondering whether the newly–made peace is about to be shattered. The actors, a hodgepodge of J.T.’s flamboyant gay friends and young Warhol–worshipping actors from the Tickler’s wait staff, shift uneasily on their feet as they wonder who among them will improvise a resolution to the unexpected plot crisis. Suddenly Head puts his fingers and thumb together Italian style, inclines his head towards the middle of the table, leans slightly towards the dons and says, in his best Brando hush: “I’ll be happy to get some more prosciutto, Don Eddie. No problem.”

“J.T. said that line made the film,” glowed Head. “Look, here comes the disarmament scene.” The waiter, a gay actor, sashays around the table collecting guns and stilettos which the heavies obediently place on his tray. “You know,” Don Eddie says to murmurs of approval from the now–enlightened thugs, “with all the moolah we will save by not buying guns, we can build a few schools… and maybe a park!” Ah, but the mobs have one last fight left in them — they fight over the check. The credits roll to “Where Have All the FlowersGone?” sung by Head, in convincing Italian — and the credits conclude with a dedication: “To Daniel Ellsberg, who had the guts to expose the madness, Il fin?”

Scrap jumped up shouting, “Dad was a star in the movies, oh yeah!” Lenny batted Howie around, and Scrap jumped down from the couch onto the dog-pile like Stone Cold Steve Austin, his wrestling hero.

“Awesome,” I said, by which I meant awesome. “But what was with the zombie hitman?”

My question snapped Head out of his reverie. “Hell, I don’t remember, it stood for something.” But his perturbation was fleeting, for he hooked my neck with his elbow and planted a smack atop my head like the kiss of death.

*an excerpt from, Trips and Trials of a Down Beat Dad 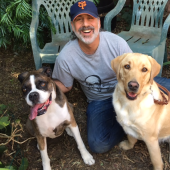 The Genius of Henry Miller