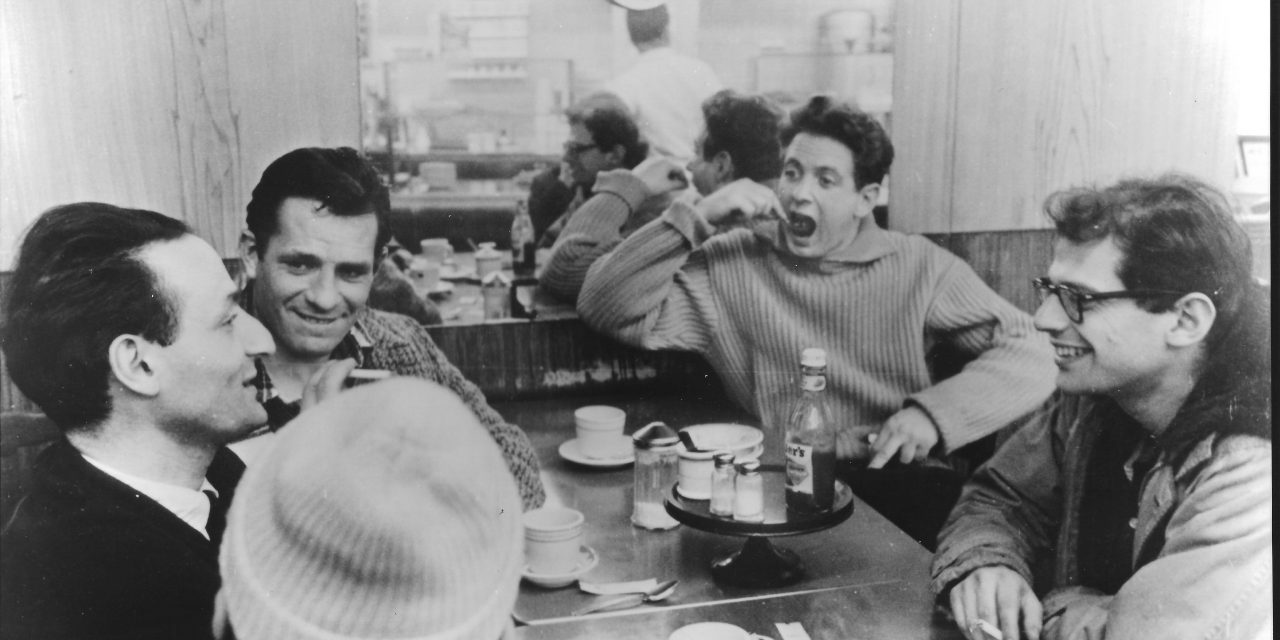 1959 was an important year in Beat Generation history. It was the year that William S. Burroughs published Naked Lunch from Paris’ Beat Hotel, that the Beats were first profiled in Life magazine, and the year the MGM released a sensationalist cinematic nightmare called The Beat Generation. In the previous three years, Allen Ginsberg and Jack Kerouac had shattered the notion that young people must conform to strict social codes, and paved the way for further decades of rebellion, growth, and acceptance. The Beat movement was in full-swing and these once literary wannabes were now idols to an entire generation. But they were not stuffy and unreachable; they were literary bad boys in the vein of Rimbaud.

In 1959 Ginsberg was looking forward with visions of a new American voice, Kerouac was awkwardly attempting to live his life in the startling media spotlight, and Burroughs was overseas, a decade into his long exile from the United States. Back home, and even in newspapers around the world, they were known derisively as the “beatniks.” At a time when calling someone a Communist was about the greatest insult that could be uttered, Herb Caen had added “-nik” to Kerouac’s “Beat,” and suddenly what started as a literary movement was now tabloid fodder. The Beats were vilified as detrimental to the morality of the nation’s youth, and as such they were used as subject matter for Hollywood’s spectacularly vapid output.

In the coming years, the image of the Beatnik as a finger-snapping poseur or a drug-addled maniac would persist, yet in the world of reality – located far from Hollywood on any map – the Beats continued to develop upon their own ideas and literature. They continued to write, to read their poems aloud, to explore new avenues in publishing and in creating art. They even dabbled – to varying degrees – in filmmaking. One such example was Pull My Daisy, a short film that aimed to incorporate the sort of spontaneous, free-form, jazz-inspired principals that governed the Beats’ written work. Directed by photographer, Robert Frank, and painter, Alfred Leslie, Pull My Daisy began filming began on 2nd January and it premiered 11th November.

The film was based upon the third act of Jack Kerouac’s play, The Beat Generation, and it was supposed to share the same name, with Kerouac having coined the term about a decade earlier. However, in true Hollywood style, MGM had capitalized on the movement and copyrighted the title,[1] leaving the filmmakers to choose the title of a poem that was collaboratively written by Kerouac, Ginsberg, and Neal Cassady in 1949. It didn’t hurt that the phrase “pull my daisy” was loaded with sexual innuendo, either.

The poem from which the movie took its title was written in the “exquisite corpse” Surrealist tradition, wherein various artists would take turns to add to a piece of work – whether a poem or painting or anything else. This fit in rather well with the spontaneous prose method and best “first thought best thought” notion that influenced the Beats, and was most noticeably espoused by Kerouac. Part of the poem is included below:

The purpose of this method of composition, later used by William S. Burroughs and Brion Gysin in their Cut-up Method, as well as numerous other artists before and after the Beats, was to create a more accurate picture of reality by not over-thinking, and perhaps, as Burroughs often claimed, to cut to the truth that your mind would otherwise hide.

Indeed, the film is best known for being narrated by Kerouac, who again supposedly improvised his lines rather than reading from script or memory. Critics have compared his reading to that of someone in a “trance,” furthering his reputation as a mystical and near mythical artist, while others have noted that he sounded exhausted and that he had lost his youthful playfulness. The film, as mentioned above, was adapted from his play, The Beat Generation, and yet he seems to spontaneously riff the lines rather than reading his pre-written dialogue. There is no sound, and Kerouac speaks the lines for each character, regardless of gender, and narrates everything seemingly as it happens, in his inimitable scat-style.

Listening to him speak, it’s as though he was watching the movie for the first time, just saying the things that came into his head, even if just filler. There are very few periods of silence, and so Kerouac – who does not appear on screen at any stage – dominates the film simply through his voice. This is an attempt to continue Kerouac’s sketching style of writing, wherein he would attempt to note down everything that was going on around him. As such, the camera frequently pans back and forth, attempting to catch all the action as it transpires, rather than take it moment by moment, focusing on one character or one action.

For these reasons, Pull My Daisy, unlike The Beat Generation, was lauded by critics for many years. Like the poem from which it took its name, Pull My Daisy was considered a masterpiece of ad-libbed, off-the-cuff acting and narration. In the movie, key members of the Beat Generation including Ginsberg, Corso, and Peter Orlovsky, goof around, even smoking a joint at one stage. There are fewer hijinks than one might have imagined, and although the Beat characters’ antics result in comedy and farce, the action is toned down. Still, the legend goes that the actors simply did what they felt – being themselves, essentially – while Frank and Leslie recorded it all.

Yet Pull My Daisy, while certainly a Beat movie, and truer to the Beat ethos than the sensationalist attempts in 1959 and later years, was not as spontaneous as it was claimed to be. Nine years later, in 1968, Leslie revealed to the Village Voice that the movie was thoroughly scripted, with the implication being that the apparent improvisation was due to a lack of acting ability on the part of Ginsberg and the others. Later, both directors admitted that the movie had not – as was previously claimed – been shot in Leslie’s apartment, but had instead been filmed on a professional film set with a budget of $15,000. While not a large sum of money for a movie, it shows that the film was not quite what it appeared to be. Ultimately, while it had been implied that the film was just the poets goofing around as themselves, with hip artists filming and the hottest novelist around narrating, essentially gaining the best filmed record of the Beat Generation as it naturally existed, instead it was a carefully constructed piece of fiction. Many hours of film were shot and edited down into the twenty-eight minute film. Additionally, and most shockingly to fans of the movie, Kerouac’s lines had been recorded as many as four times as Amram tinkled on the piano and the movie played silently in front of him. While this is hardly a great crime, it certainly detracts from the movie’s reputation and Kerouac’s supposed adherence to spontaneous prose, and his depiction as the literary jazzman.

In the end, though, it is important to acknowledge that despite Kerouac’s advocacy of spontaneous prose – or even Burroughs’ automatic writing and routines, which are referenced in the film – the Beats were guilty of editing. Burroughs’ nearly unreadable texts were endlessly composed, Kerouac’s famous writing sessions that would end in a publishable book were often edited over many years, and Ginsberg, who tended to differ, only occasionally dabbled in unrevised poetry. It should be, therefore, no great surprise that Pull My Daisy – though it may appear to be entirely unrehearsed – was an answer to their critics. It was a deliberate attempt to perpetuate the notion of the Beats as unrestrained literary bad boys, and to hold their hands up and say that they are not ashamed, for this is their life and it how they wish to live. They considered themselves the Rimbauds of their age, and wanted the world to know. We should be thankful that it is this movie, and not the numerous Hollywood cash-ins, that is preserved, remembered, and freely disseminated online more than fifty years later.

[1] MGM would release The Beat Generation in 1959, the same year as Pull my Daisy. The movie was not based on any work by any Beat author, but rather was a sensationalist attempt to cash in on the Beat fad.

[2] The poem itself was set to music by legendary composer and Beat figure, David Amram. However, Ginsberg and Kerouac were reportedly displeased that when the lyrics were sung by Anita Ellis, certain words had been changed.

The Great Breakthrough
“He made an effort to hold down a regular job, but he was a terrible employee and didn...
“It was electric”: A conversation with Michael Sharp
By Noel Dávila On Ginsberg's anger & kindness, Kerouac's “homo viator”, Burroughs' ex...
Dostoyevsky’s Heavenly Christmas Tree
For “electronic laser TV generations that don’t read Dostoyevsky” quoth Allen Ginsberg F...
Kerouac at 95
Jack Kerouac was born on March 12th, 1922, meaning that today would've been his 95th birth...
The is NOT an Anthology
In 1959, the painter, Brion Gysin, “accidentally” cut through a pile of newspapers with a ...
The Rum Diary and the Youth of Hunter S. Thompson
One mustn’t forget, in looking at the works of Hunter S Thompson, to go back and visit his...