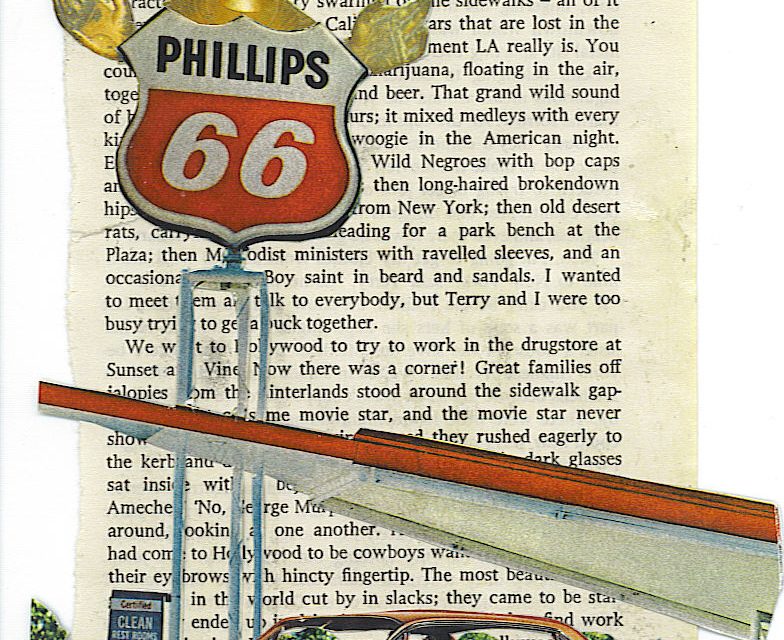 Barry Gifford is a name with which many Beat and film noir fans will be familiar. He wrote Jack’s Book: An Oral Biography in 1978, and it immediately became one of the essential Beat reference texts. Jack’s Book takes the form of a collection of stories from the mouths of Kerouac’s friends, family and other people that knew or met him, and it largely cuts through the facts and dates and critical analysis that other Kerouacian studies have, to reveal an intimate portrait of the man himself.

Gifford is also a fiction writer, heavily influenced by both Beat and noir. His style is said to be that of the Beats, while the backdrop to his novels is distinctly one resembling that commonly seen in film noir. He is perhaps most well known for his Sailor and Lula series, from which Wild at Heart was adapted to a movie by David Lynch. Gifford also wrote the screenplay Lynch’s Lost Highway.

The name Barry Gifford was suggested to me as a potential interviewee by someone at Dollyhead Books. I knew of Jack’s Book, but I didn’t immediately click to who Gifford was until I did a little Googling. I found his e-mail address and he gladly agreed to a short interview.

Unfortunately, Virgin Media tried to stop the interview from going ahead, by cutting our broadband and phone services, over a bill which had been paid… But that’s another story for another day… And despite their best efforts, Mr. Gifford was still willing to be interviewed after being made to wait several days, disrupting his busy schedule.

D.W: How did the Beat Generation literary styles influence your own writing?

B.G: Kerouac and Ginsberg were great inspirations to me. Kerouac took his early style in The Town and The City from Thomas Wolfe and tried to conflate it with Dreiser and others. His later style he adapted from Joyce. I did not follow his autobiographical form, the best of which, other than his own, was Louis-Ferdinand Celine. The beats were more of a lifestyle influence and held out the possibility that anything can happen and should.

D.W: How willing were Kerouac’s friends and associates to be interviewed for the Oral Biography?

B.G: Everyone we found was willing to be interviewed. Only two asked for money, Gary Snyder and Gregory Corso. Instead of paying Corso, a friend of mine agreed to substitute his own piss for a urine sample of Gregory’s so that Gregory could get his methadone in Paris.

D.W: You have said that many figures you have spoken to who are normally considered related to the Beat Generation were reluctant to be labelled Beats, but that they needed to be labelled so to gain recognition. Did do feel that Kerouac also shared this reluctance?

B.G: At first he did, when he considered it a derogatory term. After he redefined it as stemming from beatitude, he embraced it publicly.

D.W: What would you say of the relationship between film noir and the Beat Generation literature?

B.G: Nothing. I don’t see any connection.

D.W: And finally, could you describe your friendship with Allen Ginsberg?

B.G: I first met Allen in 1966 in London. I remained friendly with him until he died. He published a book of poems, Sad Dust Glories, with a small press I edited with another guy; and of course I edited the book As Ever, the collected correspondence of Allen Ginsberg and Neal Cassady, working on it with Allen. He was always very generous and affectionate with me, as he was with almost everybody.

Dig This ~ Ann and Samuel Charters Read Beat Poetry
We found this while doing some research on the Charters' Book, Brother-Souls:John Clellon ...
Blood and Black Power on the Streets of Chicago
This essay originally appeared in Beatdom #15: the WAR issue. By Pat Thomas &n...
Women and the Beat Generation: Literature, Art, Film
Conference at the University of Agder, Norway, September 2-4 2013 Organizers: Frida Forsgr...
Somebody Blew Up America: A Conversation with Amiri Baraka
This interview originally appeared in Beatdom #12 - the CRIME issue. You can purchase it o...
New ‘Festival of the Beats’ for Ipswich
A new literary, art and music festival celebrating the Beat Generation is being launched i...
The Burroughs Millions
In Search of the Origin of Burroughs’ Mythical Trust Fund From Beatdom #16 William S. Bu...