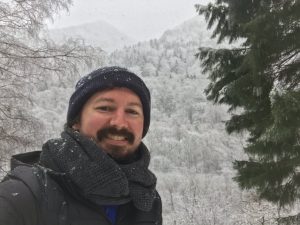 David S. Wills founded Beatdom in the summer of 2007, just after graduating (in MA Literature) from the University of Dundee. Since then he has remained the magazine’s editor-in-chief, while working and travelling around the world. He has run a bookshop in South Korea, farmed in California, lectured in China, made cider in Cambodia, run a marathon in North Korea, and currently focuses on writing and editing for Beatdom.

In 2011, his first novel, The Dog Farm, was released by Beatdom Books, followed by Scientologist! William S. Burroughs and the ‘Weird Cult’ in 2013. Shortly afterwards, he self-published a book of short stories, called 6 Stories. In 2019, his next book, World Citizen: Allen Ginsberg as Traveller, was published.